Canadian history acknowledges the descendants of Paleoindians (ancestral peoples of modern Native Americans) as the earliest inhabitants of Canada. They lived in Canada for 10,000 to 17,000 years before Europeans arrived.

The earliest contact with this "New World" (the Americas) was made by Norse seafarers known as Vikings led by Bjarni Herjólfsson, who was blown off course en route from Iceland to Greenland around 985 AD.

However, there is no documentation of this part of Canadian history, except for in the Islandic sagas; vague accounts of their exploits told in epic stories in prose or verse form, handed down by word of mouth through many generations.

"With or without the Royals, we are not Americans. Nor are we British. Or French. Or Void. We are something else.
And the sooner we define this, the better."
-Will Ferguson

The first known European contact in Canadian history was made by John Cabot, an Italian who was under the patronage of King Henry VII of England.

In his search to find a trade route to the Orient for the King, in 1497 he ended up somewhere on the coast of North America (most probably either Newfoundland or Cape Breton Island, Nova Scotia), and he claimed it for the King.

Cabot was confident he had found a new seaway to Asia, and on a second voyage in 1498 he explored and charted the east coast of North America from Baffin Island to Maryland. His voyages gave England a claim by right of discovery to an indefinite amount of area of eastern North America; in fact, its later claims to Newfoundland, Cape Breton and neighbouring regions were based partly on Cabot's exploits.

Canadian history also tells of Portuguese explorers arriving on Canadian soil, but the extent and nature of Portuguese activity in the region during the 16th century remains unclear and controversial. Throughout the rest of the 16th century the European fleets continued to make almost annual visits to the eastern shores of Canada to cultivate the fishing opportunities there.

A sideline industry also emerged: the unorganized traffic of furs. Methods of processing the furs started to develope in Europe and Beavers pelt hats became particularly fashionable. European countries encouraged the development of this infant trade and thus a new emphasis was put on settlement in Canada.

On August 5, 1583 Humphrey Gilbert, armed with letters patent from Queen Elizabeth I, formally took possession of Newfoundland in St. John's harbour on behalf of England. But the French also started to make claims on Canadian territories. However, their first attempts at settlement failed. In 1604 the fur trade monopoly was granted to Pierre Dugua Sieur de Monts, who led his first colonization expedition to an island located near to the mouth of the St. Croix River. Among his lieutenants was a geographer named Samuel de Champlain, under whom the St. Croix settlement was moved to Port Royal (today's Annapolis Royal, Nova Scotia).

It was France's most successful colony and the settlement came to be known as Acadia. The cancellation of de Guast's fur monopoly in 1607 brought the Port Royal settlement to a temporary end. However, Champain was able to persuade de Guast to allow him to take some colonists and settle on the St. Lawrence, where in 1608 he would found France's first permanent colony in Canada at Quebec. It became the capital of New France.

Canadian history describes the early days of the French colony as hard and the population as growing slowly. Champlain took personal administration over the city and its affairs and sent out expeditions to explore the interior land. During these voyages Champlain aided the Huron's in their battles against the Iroquois Confederacy.

As a result, the Iroquois would become mortal enemies of the French, aided by the British who armed the Iroquois in an effort to weaken the French. In 1629 Champlain suffered the humiliation of having to surrender his almost starving garrison to an English fleet, and he himself was taken prisoner back to England.

Since peace had been declared by England and France before the surrender, the settlement was restored to French rule. Champlain would return from Europe to spend his remaining years in the colony. He became governor of New France in 1633. 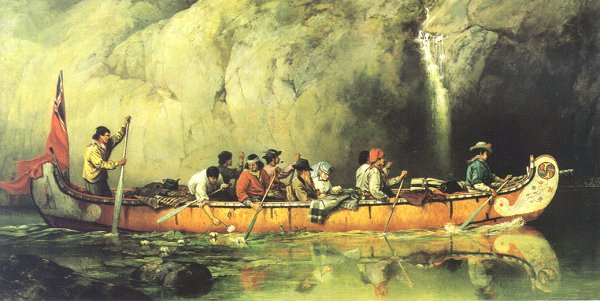