The Mute Swan: Why this Beauty is also a Beast

The Mute Swan (Cygnus Olor), most commonly known amongst the swan species, was introduced into North America by Europe and Asia in the late 1800s to grace the ponds of parks, estates, and zoos. For some, they're a loved symbol of serenity in city parks across Canada... Then they started escaping and establishing breeding populations in several areas, where their aggressive behaviour is threatening native waterfowl. 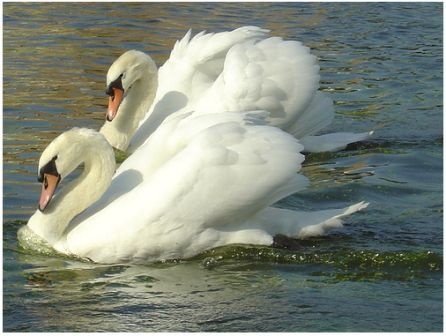 Though they're called Mute Swans, they are not mute at all. However, they earn this name due to their calls being quiet and not carrying very far.

Their flapping wings make a singing sound when they're in flight. During breeding season the male Mute Swan's bill swells and becomes noticeably larger than the female's.

Just like the Trumpeter Swan and the Tundra Swan, they're said to mate for life, but this is not always the case in Mute Swans. Some have been observed to have as many as four mates, or even "divorce" one mate in favour of another. In case of the death of a partner, they will find another partner.

The cygnets (baby swans) have two color morphs: a gray form and a white form. As adults they look alike, though the ones of the white morph may have pink or gray legs and feet instead of black.

These swans are most commonly found in the wild, in parks or on country estates. In the winter they are found on marine waters. They like to live in well-sheltered bays, open marshes, lakes, and ponds. They rarely nest in colonies. Breeding begins in March or early April. They either build a new nest or use a previously constructed mound. The large nest is made of aquatic vegetation, lined with feathers and down, and it's built well above the normal water level in swampy places near a pond or lake.

It is common for clutches of 5 to 7 to occur, but even 5 to 12 are possible. The eggs are pale gray to pale blue-green. Incubation lasts 36 to 38 days. The cygnets are brownish gray and only remain in the nest for one day. Within the next 12 months they gradually turn white.

The male (cob) may often take the first-hatched cygnet to the water while the female (pen) continues to incubate the remaining eggs. 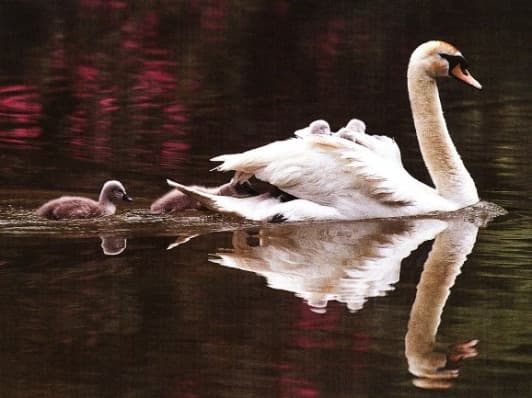 The male Mute Swan is very protective of its territory and its cygnets. In about 60 days cygnets are able to fly. They can ride on the backs of their parents or under their wings. The parents drive the young away by the following breeding season. The cygnets then join flocks of other non-breeding swans. During this time they molt their feathers, making them flightless for a short period of time.

They begin to bond with a mate in the next two years, and start looking for suitable breeding territory. Swans do not begin to breed until about their third year.

The Trouble with Mute Swans

Presently there are about 25,000 of these swan species in the Great Lakes region, Chesapeake Bay area and the North Atlantic coastal areas. Considering that there were only about 1,000 of these swans in the 1950s, this is a huge jump in their population. They are very aggressive and have been know to attack even humans who come too close into their territory; so native species of waterfowl are at even greater risk.

The lower Great Lakes region in Canada is of great concern, as it is on the major migration path and is a wintering ground for many native Eastern North American bird species. Mute Swans compete directly with many of these species for food and desirable habitat. One of these species is the Tundra Swans, whose annual migration to and from Canada's Arctic is one of the wonders of nature in Southern Ontario. Tundra swans are unable to find the food they need to survive and can be driven away from their traditional wintering areas. If the growth of Mute Swans is not contained, they may also affect the Tundra Swan's use of migratory resting areas such as the Great Lakes and migration resting areas.

Another source of concern is the alarming rate at which Mute Swans are devouring and destroying aquatic plants. According to a U.S. study a single swan is capable of eating 8 pounds of vegetation in a day, and uprooting another 20 pounds during the feeding process. This results in loss of habitat and a key food source for other waterfowl and aquatic species, including fish.

In Canada, populations of Mute Swans are being closely monitored by the Canadian Wildlife Service (CWS), and Long Point Waterfowl Researchers are monitoring their numbers in Lake Erie, Lake Ontario and Lake St. Clair, using small airplanes. Surveys show that between 2003 and 2005 the population had doubled from 1,373 to 2, 737 swans.

As the Mute Swan has no natural predators to reduce their numbers, and Ontario has no current management plan to reduce populations, their numbers are expected to grow rapidly in Ontario's lower Great Lakes area; the Canadian hotspot for the Mute Swan invasion. Fortunately this invasion has not expanded yet into Western Canada or the Maritimes. However, if something is not done soon, this growing problem will become as huge as it has in the United States.

The Atlantic Flyway Council is closely monitoring the swans. It is composed of officials from the state and provincial wildlife management agencies along an eastern seaboard migratory zone, stretching from Florida to Ontario, Nunavet and the Maritimes. The council is calling for a coordinated plan to reduce populations to 3,000 swans by 2013, and increased efforts to educate the public about the serious threat posed by Mute Swans. Hopefully they will succeed in their goal; it's hard to picture these beautiful swans as being a threat to other waterfowl.