The Trumpeter Swan (Cygnus Buccinator), one of the most beautiful of water birds, is also the largest amongst all of the swan species, as well as amongst all waterfowl.

Considering the fact that they almost grew extinct in the early 1900's, it is amazing that they have made a great comeback. I'm glad that they are still part of the Canadian wildlife. 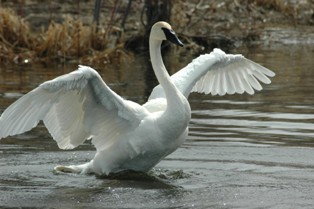 Prior to the 19th century Trumpeter Swans were fairly common all across the northern prairies. However, they almost grew extinct in the early 1900's, because they were being hunted for their down, feathers and meat, and also because they were losing their nesting grounds due to human settlement.

Thanks to an international restoration program that started in the 1930's, they survived and their numbers are gradually growing. Today they are found mostly in western Canada, Alaska and other parts of the United States. 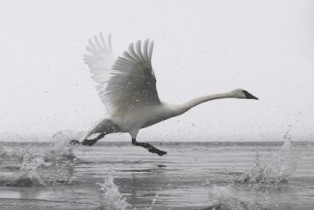 The Trumpeter Swan can weigh up to 35 pounds and its wingspan measures somewhere around 7 to 8 feet! It stands about 4 feet high and is 5 to 6 feet in body length. Trumpeters have a black bill (which is longer than that of the Tundra Swan) and black feet. They live in lakes, ponds and rivers, and feed on seeds, grains and wetland plants as well as snails, insects and small fish. Their thick layers of down makes it possible for them to tolerate harsh winter temperatures as low as -30 C. Trumpeters earned their name because of the trumpet-like sound they make.

Trumpeter Swans are divided into three main populations: the Pacific Coast, the Rocky Mountains, and the Interior.

The Pacific Coast Population is the largest one and breeds in Alaska and western Canada while they winter south to the Columbia River.

The Rocky Mountain Population being the second largest population has two separate sub-populations: A year-round resident flock remains around the Red Rock Lakes National Wildlife Refuge in Montana, whereas a Canadian flock migrates into the same region for the winter.

The Interior Population, which includes all Trumpeters east of the Rocky Mountains, is the result of more than thirty years of reintroduction efforts.

Swans stay in swamps, marshes, and shallow forested lakes in the summer. As they are very sensitive to human activity they will quickly abandon prime habitat when disturbed. In order to survive the winter they look for ice-free water to find enough food. The coastal populations find appropriate wintering habitat in estuaries and protected coastlines. The Rocky Mountain flock, forced by severe weather, concentrates in the Greater Yellowstone Ecosystem where geothermal activity prevents freezing.

Trumpeter Swans mate for life. They begin their courtship on the wintering grounds at two to three years of age. The courtship ritual is an amazing show and includes synchronized swimming, head bobbing, blowing in the water, and "singing". 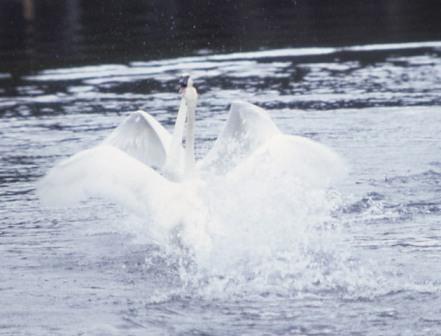 They may not nest for another year or two, but when they’re ready for breeding, couples arrive on their nesting grounds before all the ice has melted, to claim and defend large territories (70-400 acres). They prefer large bodies of water with plenty of food supply, dense surrounding vegetation for privacy, and sufficient room for take-offs.

Soon after arrival the pairs start building their nest, either by restoring the previous year's nest or by selecting a new site. The nest is often built on top of muskrat houses or beaver lodges. It measures up to 2.5 m across and rises 40 cm above the water line.

The female (called a pen) usually lays 3-9 large off-white eggs and hatches for 33-35 days, leaving the nest only for short periods to feed herself while the male (or the cob) swims nearby, guarding against predators.

Newly hatched cygnets are covered with fluffy pale gray down. After a day or two they leave the nest, starting to learn to feed themselves with the help of the parents who break off plant material so that it floats to the surface where the cygnets can reach it.

It’s not unusual for swan families to lose nearly half of their youngsters due to cold, wet weather, parasites, insufficient food, or predators.

Cygnets get their first feathers after one month. After 10 weeks they are fully covered with feathers of a light brownish-gray. By 15 weeks they reach a weight of about 9 kg and start learning to fly. The swans in the northern climates don’t have much time to perfect flight before it’s time to leave the rapidly freezing lakes for wintering grounds.

Though the Trumpeters are being protected throughout the United States and Canada since 1935, today large numbers are dying due to lead contamination (YouTube). Organizations such as The Trumpeter Swan Society, the Canadian Wildlife Service, The Washington Department of Fish and Wildlife, the US Fish and Wildlife Service, non-profit organizations, and concerned citizens are working hard to find out where the swans are picking up the lead shot. They are doing their best to protect these magical birds, but the lead contamination is still an ongoing fight.

Learn more here: Save the swans!

Join the Trumpeter Swan Society if you want to volunteer and extend your help in saving these birds. Hunters can be of great help too by switching from toxic lead to non-toxic ammunition. Non-toxic shot has been required for all waterfowl hunting in the United States (since 1991) and in Canada (since 1999). All lead ammunition is toxic to wildlife and the environment. Help preserve the majestic Trumpeter Swan! 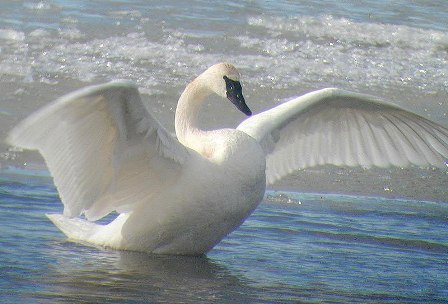