The Tundra Swan: an Arctic Beauty

The Tundra Swan (Cygnus Columbianus) - once known as the Whistling Swan - is the smallest swan type from the three found in North America. Just like the Trumpeter Swan it is native to North America, whereas the Mute Swan was introduced to this continent.

They look a lot like Trumpeter Swans, but Tundra Swans have a yellow spot on their bill right under the eyes, and they are smaller than the Trumpeters (and the Mute Swan), with slightly shorter necks. Unlike the lower calls of the Trumpeters, their calls are higher-pitched and noisier.

Here is a picture of these two types of swans; can you spot the Trumpeter? :) 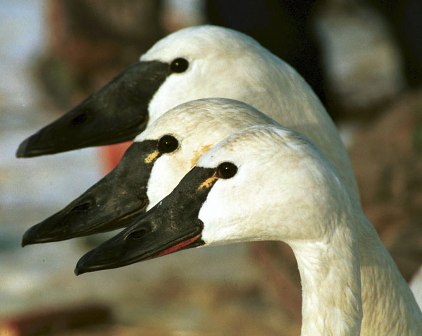 These beauties make their way north each spring to nest in the remote and undeveloped coastal plain of the Arctic National Wildlife Refuge. The Tundra Swan is among the earliest spring migrants, arriving in late May and early June. Breeding pairs build their nests in upland tundra areas near river deltas along the northern coast. The widely-scattered nests are large mounds of grasses, sedges, lichens, mosses and feathers.


The species divides into two populations: east and west. The eastern population of some 100,000 birds, begins the migration near the shores of Maryland and North Carolina. The western population migrates earlier and more swiftly than its eastern counterpart. They begin leaving their winter habitat after the first spring thaw. Tundra Swans from Chesapeake Bay cross Pennsylvania to Lake Erie from the first week in March into early April, whereas those at their central California winter grounds leave in mid-February. Most have migrated north to Alaska and Canada by early April. The first swans generally reach their breeding grounds on the Yukon Delta in late April. By late May or early June all will have arrived.

At Lake Erie, the flocks use a shortcut across the water provided by Long Point, one of the world's longest freshwater spits. Upon the arrival of thousands of these birds, they make a striking spectacle worth witnessing and hearing! Especially at night, when most of the socializing takes place, the level of the sound is very high. The birds flock together on the ice and water in the mornings and evenings, while they move into the fields to feed during the day. Some flocks skip the area altogether, but others stay for a week to 10 days.

From Long Point, the birds head west to Aylmer, Ontario, and Grand Bend, on Lake Huron. They then cross into Michigan on a route that takes them northwest, and ultimately to the Mackenzie River Delta and Arctic coast. It's a total of 4,500 km. one-way trip, and if they went straight north, they would end up in Precambrian Shield without food and open water. Being smart, they go with the ice breakup through agricultural areas. Tundras are big, powerful flyers, flying in the impressive V-formation during migration, just like other big migratory birds.

Tundra Swans are most likely to be seen in fields, as they breed on Arctic wetlands and winter on estuaries along the East and West coasts. They usually breed on or near tundra ponds, lakes, and sluggish rivers, though less often near sheltered tidal waters. They tend to avoid areas near exposed marine coasts. Each year the cygnets remain with their parents until they arrive back on the breeding grounds the following year.

These swans usually mate for life. The courtship and pairing between young adults starts in late winter and continues through the spring migration. Adults who are already a couple reinforce their bond by vocal and visual displays. The most spectacular of all is the "victory" display, when the cob (male) and the pen (female) face each other, open their wings and slowly flap them, dipping the head and neck forward and backward, and together, as in a duet, produce a formalized sequence of loud, melodious sounds. Beautiful!

Tundra Swans don't start breeding until their fourth or fifth year. One year before a pair starts breeding they select and defend a territory without actually nesting. When they reach breeding age, nesting happens in late May or early June before the snow melts off the tundra, while many of the lakes are still frozen. In an exceptionally warm, favourable spring, the female may lay 5 or 6 eggs, but otherwise a clutch of four eggs is normal. However, an unusually cold and snowbound spring may inhibit nesting for that year. Not all adult pairs nest every year.

Incubation lasts 30 to 32 days and begins when the final egg is laid. The female incubates the eggs, while the male remains close by, guarding the nest site and defending the territory. Re-nesting will not take place if the eggs are destroyed. The downy ash-gray cygnets emerge in early July and are soon able to forage for themselves. The parents help them find suitable plant food, and the cygnets need to be brooded frequently in order to protect them from the cold and the onslaughts of mosquitoes. Cygnets are generally able to fly within 9 to 10 weeks. 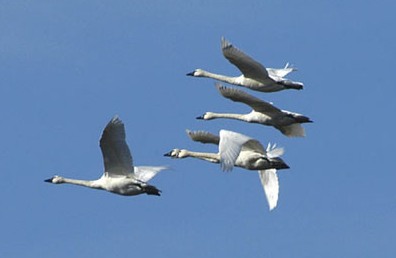 Adult Tundra Swans molt between July and August on the Yukon Delta. They are flightless for several weeks, until the moulted primary wing feathers are replaced by new ones. Non-breeders stay in flocks of 3 to 15 during the breeding season. When they regain flight in late August they begin to come together in sizable flocks with other young, non-breeding birds of the previous year, and unsuccessful nesters or unpaired adults that have spent the summer in small groups in favourable feeding locations. From these points, the flocks begin the early stages of migration as freeze-up approaches. An early winter will doom cygnets not yet ready to fly out of the north.

Birds of the eastern population in the northern part of Chesapeake Bay may face a prolonged freeze in a severe winter, even after they have returned to the wintering range. Rather than heading south to more temperate conditions, they sometimes spend most of this time sleeping on the ice, their heads drawn back under their wings. Many birds often die, particularly young birds. Tundra Swans use extensive shallow fresh and brackish water in winter. 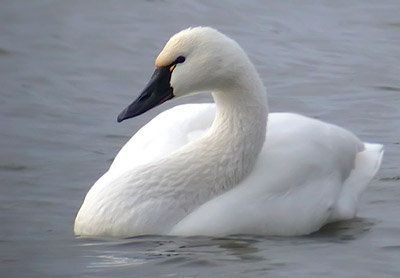